1. Tell HSBC to divest from and to stop lending to companies arming Israel’s brutal oppression of Palestinians. Email the CEO of HSBC: http://waronwant.org/HSBC 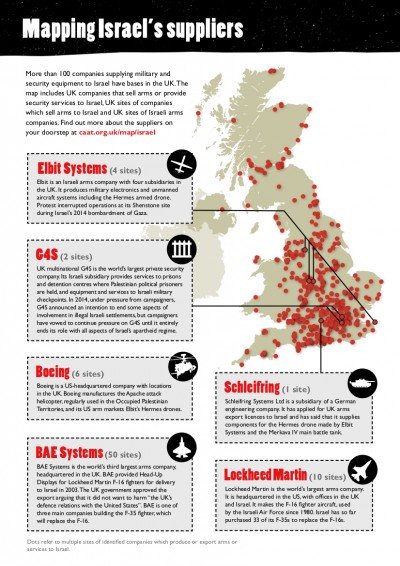 Find the suppliers on your doorstep

More than 100 companies supplying military and security equipment to Israel have bases in the UK. Find out about the suppliers on your doorstep.

During Israel’s 2015 assault on Gaza, activists occupied Israeli arms company Elbit’s factory in Shenstone, causing its operations to grind to a halt and costing Elbit over £100,000. On 6th July 2016, to mark the first anniversary of the assault on Gaza, protesters shut down three Elbit sites – three in the UK and one in Australia! Read more on Block the Factory. The action continued in 2017.

Support the Palestinian call for a global movement of Boycott, Divestment and Sanctions against Israel. Visit waronwant.org/BDS or palestinecampaign.org/bds.